Citation: Delcroix I, “Assessing the Impact on Drug Dose Delivery of a Two-Step Autoinjector”. ONdrugDelivery Magazine, Issue 67 (May 2016), pp 38-42.

Isabelle Delcroix introduces a two-step autoinjector platform, Safelia, which incorporates innovative and patented design features that enable it to deliver a both fluid and viscous formulations from standard glass prefilled syringes with benefits across the board from reducing the risk of syringe fracture to increasing patient comfort.

Injectable formulations are the fastest growing pharma segment. Biologics are increasingly used to treat a wide range of chronic diseases requiring frequent administration over a long period. Developing drug delivery devices able to administer the pipeline of biological molecules is a challenge as biotherapeutics tend to be more viscous, concentrated and administered in a larger volume. 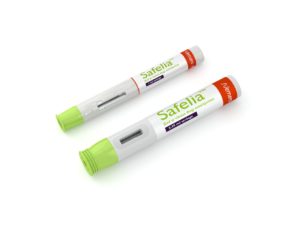 Considering patient adherence is an additional challenge. Less frequent injections, therefore larger volumes and more concentrated formulations, is a target for injection, devices which should also deliver with possibly less pain, less bruising and over a short delivery time.

Nemera’s new generation of two-step autoinjectors, Safelia™ (Figure 1), has been designed to ease the patient self-injection experience and to deliver a variety of drug products in glass syringes. These range from more fluid formulations to the most challenging drugs such as viscous, sustained-released, concentrated formulations, products for subcutaneous and intramuscular injection, and including larger volumes.

Figure 2: Comparative stress maps of the Safelia (top) and another marketed autoinjector (bottom).

The specificities of Nemera’s patented autoinjector design include the ability to handle high injection spring forces and deliver formulations in standard glass syringes. By design the coupling inside the autoinjector is not made around syringe’s flanges, a structural weak part of the syringe, but around the syringe shoulder (Figure 2). The spring release shock and the energy is absorbed by a rotating cam system and allows highly viscous injections as well as large-volume delivery. Risks of breakage are therefore reduced by design during triggering of the autoinjector but also during transportation, drop and handling.

The mechanism of two-step autoinjectors, as their name indicates, involves two consecutive steps: cap removal and syringe emptying. Injecting a large volume (2 mL) of viscous formulations in a short time (10 seconds) using a thin needle requires greater force than smaller volumes over longer times. The consequence is that the higher the spring energy, the higher is the kinetic energy (E) delivered to the syringe at impact (just after needle insertion, and just before start of syringe emptying). 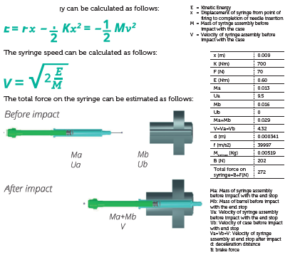 Figure 3: Calculation of total force on syringe resulting from a spring force of 70 N.

Typically, using a spring force of 70 N could lead to 272 N applied on the glass syringe (air bubble is not considered in that calculation). This force can lead to glass syringe breakage.

Different methods can be used to reduce the risk of glass breakage:

Nemera recently conducted a study to investigate glass syringe fracture risk in autoinjectors by lowering the impact force that can be transmitted to the syringe. Stress analysis was used to demonstrate the effect of lower impact force on syringe stress level.

This software simulates stresses between all parts at the calculated speed (Adams 2014).

All other conditions were constant including: spring force; formulation viscosity; syringe size; needle gauge and length.

The deceleration distances can be estimated at 0.31 mm with the 45° cam compared with 0.34 mm with the straight cam (Figure 6). The distance leads to a reduced shock on the syringe.

The tendency for larger injected volume with higher viscosity highlights the need to consider this risk at earliest stage in the development process. The results obtained during this study showed that by design, syringe speed at needle insertion can be reduced, as can the stress on the glass syringe, reducing the risk of syringe breakage.

The Safelia™ autoinjector combines design elements (summarised in Table 1) such as gripping the syringe by the shoulder rather than the flange, and a slower insertion time achieved through 45° orientation of the cam, which provide significant benefits in terms of patient comfort and safety (Figure 10). 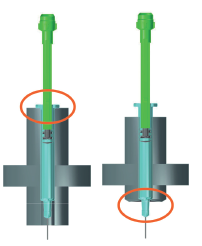 Figure 4: Gripping syringe on the shoulders (right) instead of the flange (left) reduces overall stress. 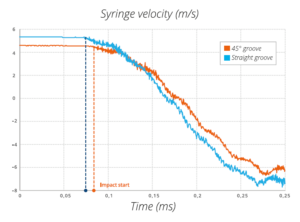 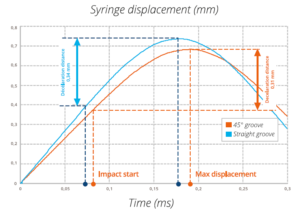 Figure 6: Syringe displacement distances (mm) over the course of the simulated autoinjection. 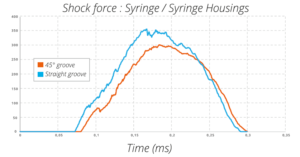 Figure 7: Shock force (N) on the syringe / syringe housing during the simulated autoinjection. 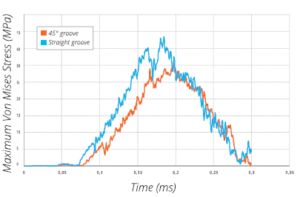 Figure 8: Maximum stress (MPa) on the syringe from the simulated autoinjection with 45° cam compared with straight cam. 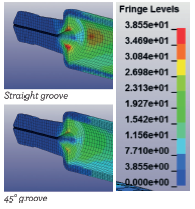 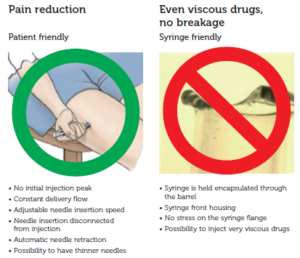 Figure 10: Benefits of the system for patient comfort and safety.

Safelia™ is now ready to be customised to your formulation and delivery specifications. 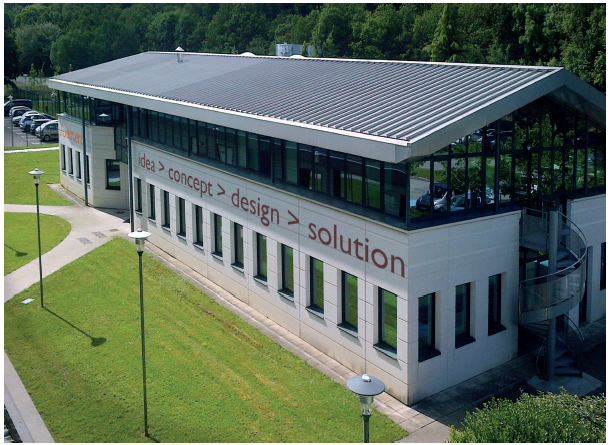 THE DRIVE UNIT OF THE PATCH PUMP

CONNECTIVITY
THE ADD-ON APPROACH TO CONNECTIVITY
William Cirillo and Christian Keller describe a simple add-on connected digital platform that can work with an existing delivery device. Digital health is an umbrella term that covers a lot of different applications of technology in the health industry. From wearable sensors and electronic health records to health apps, connected and digital solutions are becoming more accepted.

EXPERT VIEW
SPRING DEVELOPMENT FOR MEDICAL DEVICES
Neil Fletcher provides a spring manufacturer’s perspective of how springs can be used in medical devices, and how a lengthy and extensive device development process affects normal custom and practice in our industry. The report focuses on spring technology and highlights some of the challenges that spring manufacturers face daily.
Top
This website uses functional cookies (but not advertising cookies). View our Privacy Policy.
Close
Privacy & Cookies Policy
Necessary Always Enabled