Historically, injectable drugs were contained in vials and administered in healthcare facilities by professionals. But with an increasing trend towards self-administration and at-home administration, prefilled syringes (PFS) emerged in the early 2000s. The growing popularity of the PFS is due to its ease of use, facilitating the injection process and reducing the total injection steps, but also the improved user safety and the reduction of dosage errors. It is also linked to their cost efficiency, not requiring drug as much drug overfilling as vials, which require overfill of up to 25%.

In the parenteral industry, needlestick injuries remain a global concern. According to the WHO, more than three million exposures to blood occur every year, resulting in health, psychological and cost issues. Safety devices for PFS have been developed to aid in the protection of users from needlestick injuries. Safety devices are classified in two categories: “passive” if the safety feature automatically activates at the end of the injection without any additional gesture from the user; or “active” if the user needs to perform an additional gesture to trigger the safety feature once the injection completed. 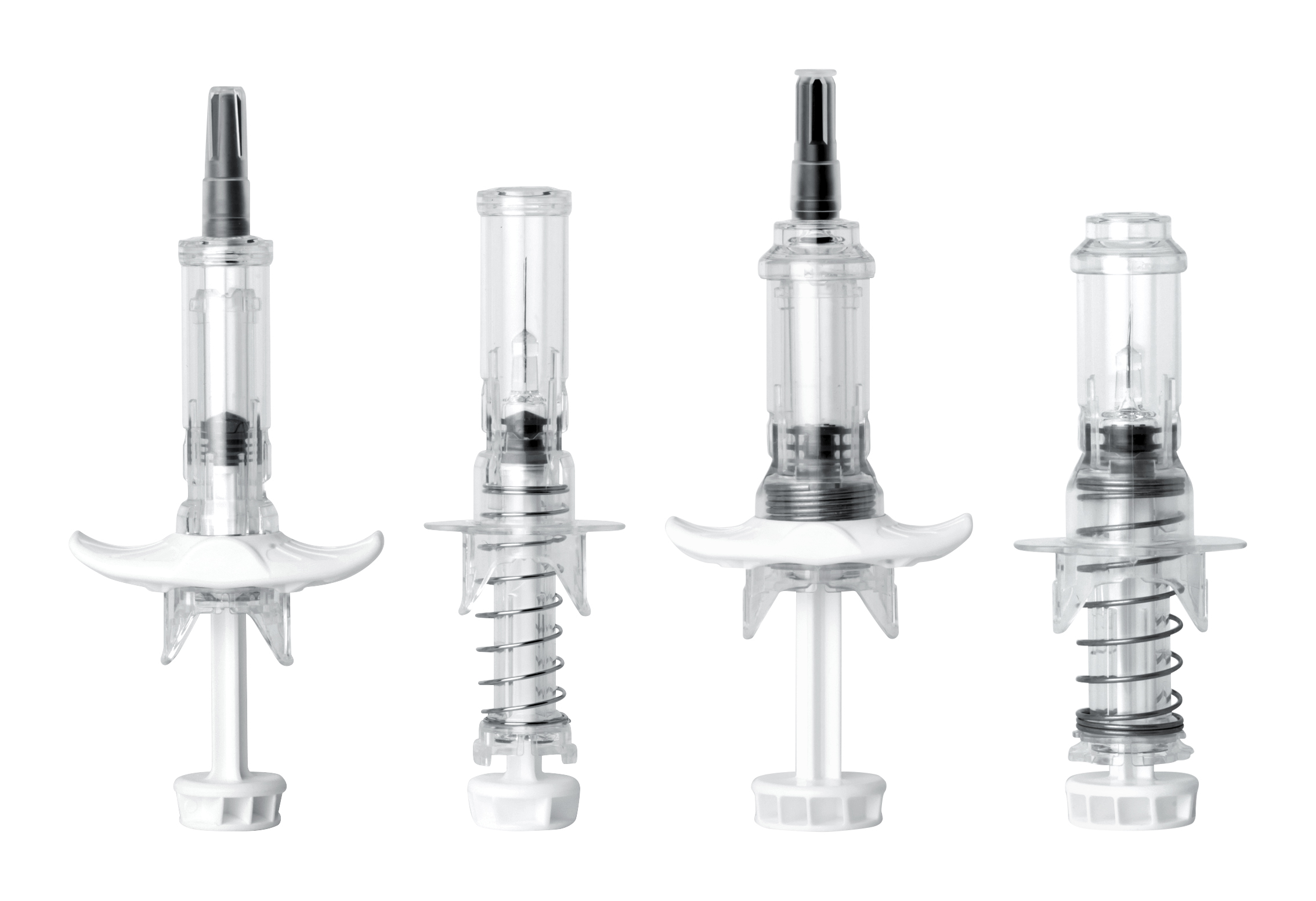 Figure 1: The Safe’n’Sound® platform, for 1 mL and 2.25 mL prefillable syringes.

Nemera has developed Safe’n’Sound® (see Figure 1), a passive safety device platform for PFS, which not only responds to the recommendations of the EU Council Directive 2010/32/EU and US Federal Needle stick Prevention Act, 2000 and aids in the protection from accidental needlestick injuries, but has also been designed to optimise drug dose delivery (consistency of drug dosing) thanks to a patented mechanism. Design optimisation of these output parameters is key for pharmaceutical companies as they could impact treatment efficiency and drug overfilling.

Safe’n’Sound® is an open platform of passive safety devices for prefilled syringes. It is an add-on to the PFS whereby the PFS is snapped in to the safety device. Assembly with the PFS is carried out at the pharma company or CMO facility and, thus, end-users (patients and healthcare professionals) always receive the product assembled.

Safe’n’Sound® 1 mL is on the market in both staked and Luer versions. Nemera has industrial capacity of more than 25 million units per year. Nemera has also developed a version compatible with 2.25 mL staked syringes.

Marketed passive safety devices have based their safety feature mechanism on the same kind of concept: when the head of the plunger rod reaches the position corresponding to the theoretical end of the injection, a spring is released covering the needle with a sheath. In reality, safety feature activation is designed to be triggered just before the theoretical end of the injection to ensure activation. The main advantage of passive safety devices is the limited control the user has on the activation. However, if the activation trigger is not well adjusted, a limited volume of drug may not be injected.

Figure 2: In the study, each user performed six injections on a silicone pad. (Safe’n’Sound® device
shown here post-injection, i.e. in the safety-activated state).

Three registered nurses and seven non-healthcare professionals were involved in the study. Each user performed six injections on a silicone pad (Figure 2) with each of the three passive safety devices. Safety devices were equipped with 1 mL PFS and stopper from the same batch, and filled with 0.5 mL of distilled water. To reach those conditions, marketed safety devices were disassembled from the syringes containing the marketed drug, and mounted with the new syringe and stopper mentioned previously. The specific plunger rod of each device was screwed back in the new stopper. As a result, the only difference between the three systems including the syringe, the stopper, the distilled water and the safety device was the safety device. As syringes, stopper and liquid used were the same, injection force was similar between the systems. Safe’n’Sound® device is referenced as Safe’n’Sound® System. The two other marketed devices A and B are respectively referenced as System A and System B.

The tests were performed according to Nemera internal protocol P084-02.1 The main steps were:

The non-injected volume was defined as the difference between the weight after injection and the weight of the empty system (mass2 – mass1). 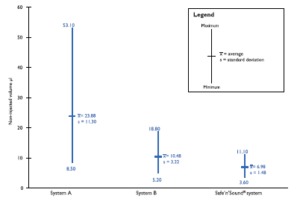 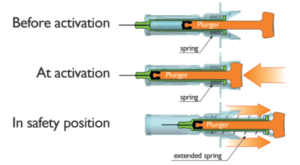 Figure 4: The Safe’n’Sound® mechanism helps syringe emptying, thanks to the two opposites forces applied by the user and the spring during injection.

The study highlights how safety device design impacts non-injected volume. Improved performances of Safe’n’Sound® system can be explained for the following reasons:

The comparative drug-dose delivery study highlights how Safe’n’Sound® optimises drug dose delivery, minimising the non-injected volume (lower average and variability) compared with other commercially available passive safety devices. This promotes increased treatment compliance and results in cost savings for pharmaceutical companies, reducing the need for overfilling. Other tests 3 have further highlighted how Safe’n’Sound® guarantees a non-injected volume comparable with a naked syringe. The performance of Safe’n’Sound® is linked with its function, which reduces human error.

Design optimisation of these output parameters is key for pharmaceutical companies as they have an impact on treatment efficiency and drug overfilling.

In addition to lower variability of residual volume highlighted in the study, Safe’n’Sound® differentiates from other passive safety devices on numerous other points. For example, the platform integrates numerous ergonomic features to facilitate the handling, gripping and comfort for the user: a large thumb pad surface to smooth the injection; large built-in finger flange to facilitate handling; a round shape for easy and comfortable handling; a spring located at the syringe flange position to provide good visibility of the syringe tip and able inspection of the drug; an optional ergonomic extended finger flange (available in a variety of colours) to overcome the problematic of dexterity issues and drug viscosity (see Figure 5).

Figure 5: An optional ergonomic extended finger flange (available in a variety of colours) overcomes the problem of dexterity issues and drug viscosity.

Results from Safe’n’Sound® simulated clinical user study performed with device naïve patients and healthcare professionals from US and Europe showed how these design features translate into real clinical benefit.

There are numerous advantages for pharma companies too, in addition to those arising from clear clinical and patient benefits. For example, thanks to its specific patented clips design, Safe’n’Sound® requires low force to snap the syringe into the safety device while high force is required to unload the syringe. As a result, the risk of syringe breakage during insertion is reduced and the syringe is hold firmly once inserted into Safe’n’Sound®.

Finally, the device is robust against shocks and vibrations allowing safe handling during transport and on assembly lines. Consequently, Safe’n’Sound® can be delivered in trays or bulk, making it a cost-effective solution for pharmaceutical partners.

CONNECTIVITY
THE ADD-ON APPROACH TO CONNECTIVITY
William Cirillo and Christian Keller describe a simple add-on connected digital platform that can work with an existing delivery device. Digital health is an umbrella term that covers a lot of different applications of technology in the health industry. From wearable sensors and electronic health records to health apps, connected and digital solutions are becoming more accepted.

PREFILLED SYRINGES
CRITICAL MATERIAL CONSIDERATIONS FOR DRUG CONTAINMENT
Dick Molin highlights some of the hazards that arise through the use of traditional lubricious coatings in parenteral delivery devices. Particular focus is paid to the problems of protein aggregation and trace impurities leaching from elastomeric components before describing how the polymer Parylene, applied as a very thin coating using SCS’ unique deposition method, avoids them.