SUSTAINED DRUG DELIVERY TO THE POSTERIOR SEGMENTS OF THE EYE

Shikha Barman reviews approaches for delivering drugs for diseases of the back of the eye, and introduces EySite-InjecT™, a biodegradable, precisely tunable sustained-release delivery system which can be administered to suprachoroidal, intravitreal, subconjunctival sites by injections through a 31G needle.

DELIVERY TO TREAT DISEASES OF THE POSTERIOR SEGMENT

Among these, AMD is a leading cause of blindness among the elderly. In the US, more than eight million people suffer from this disease; this number is projected to increase many-fold by 2020.1 AMD can be of the dry and wet form and is a consequence of excessive aging associated with alterations in the retinal pigment epithelium (RPE). In wet AMD, CNV occurs with fluid build-up in the sub-retinal space. The dry form of AMD is associated with drusen formation and RPE atrophy.2 Diabetic Retinopathy often leads to neovascularisation and macular edema and is the third leading cause of blindness in the US. Macular edema is the swelling of the macula and occurs in approximately 10% of all diabetics.3 Endophthalmitis is another cause of blindness. It is characterised by infection of the interior ocular space by microorganisms, due to post-operative infections. These include gram positive bacteria such as Staphylococcus aureus and streptococci.4,5

The clinical and experimental drugs for the posterior segment treatments include both small and large molecules (such as siRNA, antibodies, growth factors, DNA), but delivering these molecules to the target sites is problematic. When administered topically, drug concentrations in the retina and choroid are many-fold lower than the tear fluid. Drug delivery to the posterior segment of the eye is most efficiently achieved by local, ocular routes of administration, which includes intravitreal, subretinal, suprachoroidal and periocular injections.6,7

Intravitreal injections and implants deliver drugs effectively to the retina and the choroid. For example, intravitreal injections of therapeutics are routinely used in the treatment of wet AMD (Lucentis™, Macugen, Vitravene™), macular inflammation (Triesence™), etc.8 This mode of administration while efficacious is highly invasive; considerable risks exist to developing infections (endophthalmitis) and retinal detachment with repeated injections over a person’s lifetime. However, high concentrations of drug can be achieved with intravitreal injections with sustained presence due to the relative lack of fluid flow in the vitreous humour. Triamcinolone acetonide is the most commonly used steroid treatment for AMD and vitreoretinal disorders. To achieve a dose for prolonged duration and to minimise repeated injections, triamcinolone acetonide suspension must be injected at high concentrations. Due to the presence of high concentrations of drug in the vitreous, lateral drug diffusion into the aqueous humour leads to significant adverse events such as cataract formation, glaucoma induced by increased intra-ocular pressure and blurred vision due to blocking of the visual field.

In contrast, the periocular route is less invasive than intravitreal administration and it provides higher retinal and vitreal drug concentrations than eye drops. Periocular delivery of therapies can be accomplished through injections or implantation of the drug to the sub-conjunctival, sub-tenon, or parabulbar space. However, the drug must penetrate through several barriers: sclera, choroid and RPE. Relatively high permeability of sclera to macromolecules has resulted in renewed interest in this route.

Macromolecules such as anti-angiogenic antibodies, oligonucleotides, trans-gene expression products and growth factors are proving to have immense therapeutic value in the treatment of back-of-the-eye diseases. Scleral permeability is dependent upon the molecular radius as opposed to the innate lipophilicity of the drug; macromolecules up to 70,000 Da can readily penetrate the sclera.7,9

However, one technical challenge with delivery via the periocular route is the enhanced clearance of drugs due to fluid flow in these vascularised tissues. When injected into periocular tissues, both small molecules (ophthalmic steroids) and macromolecules (proteins) have been determined to be rapidly eliminated into conjunctival lymphatics and episcleral veins. On a positive note, though, long-term transscleral delivery can be obtained by utilising drug-containing microspheres; retention of microspheres has been demonstrated at the site for approximately two months.9

Ocular implants have been the principle platform for the sustained release of therapeutics, either from biodegradable or nondegradable matrices. Non-biodegradable implants can provide more accurate control of drug release and longer release periods than the biodegradable polymers do, but require surgical implant removal with its associated risks.1

“Key considerations in developing an appropriate therapy for a posterior eye condition are: the disease being treated (acute, or chronic); and drug properties…”

Vitrasert® and Retisert® (Bausch + Lomb, US) are clinically used non-biodegradable implants. Vitrasert® was the first implantable ganciclovir delivery device, approved by the US FDA in 1996 for the treatment of cytomegalovirus (CMV) retinitis for up to eight months, and is the primary line of care of patients with CMV. However, occasional endophthalmitis and an increased rate of retinal detachments have been associated with this implant. Retisert® contains fluocinolone acetonide; this product is utilised in the treatment of chronic non-infectious posterior uveitis. However, Retisert has been shown to increase intraocular pressure and cataract progression. Both of these indications could benefit from a re-formulation of the drug into precise micro-delivered matrices delivered into periocular space. Illuvien™ (Phase III trials) is a rod-shaped implant containing fluocinolone acetonide. The product releases the drug for up to three years. Another product, I-vation™ (releasing triamcinolone acetonide for two years) is in Phase I clinical trials to treat diabetic edema.

Recently, a biodegradable intravitreal implant, Ozurdex™ has been approved for the treatment of macular edema secondary to retinal vein occlusion and for noninfectious uveitis. This implant is comprised of PLGA and releases incorporated dexamethasone over 4-6 weeks.

EySite-InjecT™ encapsulates have been developed by Integral BioSystems as a platform drug delivery system for all therapies that can benefit from sustainedrelease treatment.

The delivery system has been engineered specifically for injection into target ocular tissues and spaces, including suprachoroidal, intravitreal, subconjunctival sites. The delivery system, optimised for the specific drug molecule, has certain cassette-like features that include proprietary compositions, process engineering methods, surface treatments and vehicle traits that allow injection through a 31G needle and long-term, precise and predictable release of drug in the ocular space. The system utilises only excipients that are present in approved parenteral injectable drug products.

The process has been successfully enabled for the fabrication of EySite-InjecT™ encapsulates for water-soluble, smallmolecular- weight and higher-molecularweight peptides, oligonucleotides, DNA, proteins, ophthalmic steroids, antifungals, antibacterials and NSAIDs. Critical process parameters for larger scale production of EySite-InjecT have been developed for an ophthalmic steroidal drug and a watersoluble peptide.

The process to fabricate EySite-InjecT™ encapsulates has been optimised to have high drug content within the matrices. A maximum volume of 50 μL can be injected into the vitreous humour or suprachoroidal space safely. Thus, the entire dose needs to be contained in that volume. This requires the drug to be potent, and the delivery system to be injected at a high concentration. For EySite encapsulates containing an ophthalmic steroid can be injected at a concentration of 400-500 mg matrix/mL, with 90% drug encapsulation achieved per gram of matrix, allowing release of 1-6 μg of steroid per day, for 180 days in vitro (USP4 in vitro release model).

One of the issues of sustained release from standard PLGA microspheres is erratic release of the drug in vivo due to instant aggregation and eventual coagulation post-injection and the failure to maintain shape. Furthermore, drug release profiles from PLG matrices are sigmoidal with low concentrations of drug released initially, followed by large “bursts” as the matrix starts to degrade. Proprietary EySite-InjecT PLG encapsulates have nearconstant release for the entire duration. Unpredictable release can result in subtherapeutic drug levels, or dose dumping. EySite-InjecT™ encapsulates are designed to be non-aggregating and maintain shape due to a proprietary treatment prior to injection.

For achieving a target release of an ophthalmic steroid for six months in vivo, relatively large PLGA microspheres or implants are required – neither mode of administration is injectable through 31G needles. EySite-InjecT™ encapsulates are injectable through a 31G needle in any ocular space (suprachoroidal, intravitreal, periocular). Steroid-containing EySite-InjecT™ encapsulates have been engineered to bioabsorb in generally an equivalent time frame for 100% drug release.

The feasibility of long-term release of an ophthalmic steroid from biodegradable EySite-InjecT™ formulations, tested in vitro at 37°C, pH 7.4 is shown in Figure 1. The release profiles demonstrate modulation of release rates to meet target specifications. 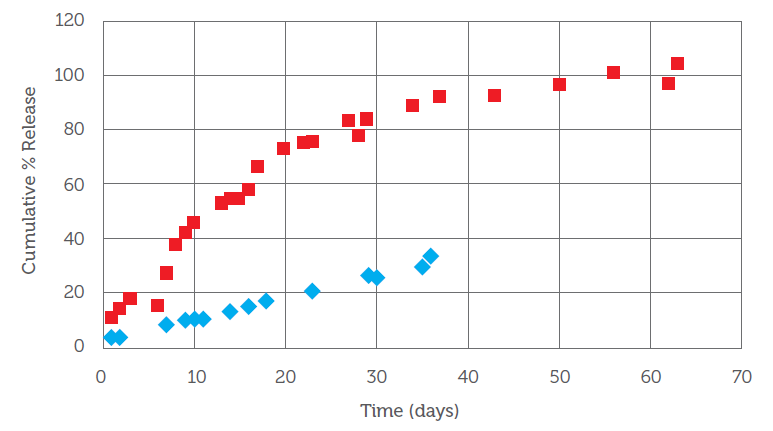 Figure 2 demonstrates release modulation of a highly water-soluble peptide from EySite-InjecT™ encapsulates, tested in vitro, at 37°C, pH 7.4. The data demonstrates that the internal microstructure of encapsulates influence the release rate of a drug. 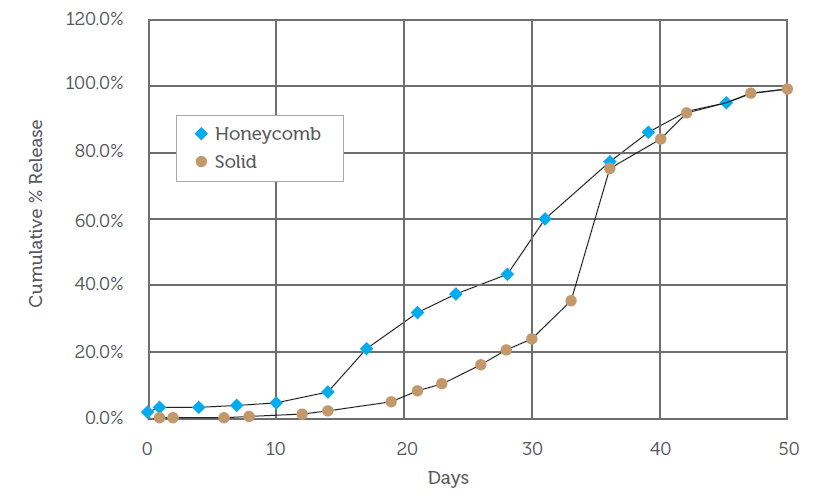 While this can be utilised as a handle to control release, achievement of reproducible internal structure is no small feat. The proprietary process to fabricate EySite- InjecT™ encapsulates produces reproducible microstructure.

Studies are underway to further test and characterise these products.

A balanced, realistic and strategic approach must be adopted by clinicians to achieve therapeutic concentrations of drug at the target site, considerations that must depend upon the acuteness of the disease and the need for repeated injections.

For example, an acute and severe infection in the posterior chamber may require treatment via direct injection into the vitreous to enable efficient eradication of the infection by achieving high drug concentrations at the target site. Acute inflammatory reactions should likely be treated in a similar manner, to enable a rapid and efficient effect. However, therapy of chronic conditions like diabetic edema and AMD should be addressed via injections to periocular tissue spaces such as the choroid, sub-tenon, parabulbar, sclera, etc, and a strategy for disease management developed. For example, an intravitreous injection of the drug every six months may be considered minimally invasive and feasible, if such sustained-release options exist and have been validated. Likewise, treatment of retinoblastoma should likely be addressed by direct intravitreal injection, as opposed to risking rapid drug clearance rates seen in barrier-compromised cancer patients.

“EySite-InjecT™ encapsulates are injectable through a 31G needle in any ocular space (suprachoroidal, intravitreal, periocular)…”

On the other hand, continuous presence of an anti-inflammatory drug at high concentrations in the vitreous can induce glaucoma and cataract formation; treatment of inflammation for a chronic condition is best approached via suprachoroidal delivery. Thus, key considerations in developing an appropriate therapy for a posterior eye condition are: (a) the disease being treated (acute, or chronic) and (b) drug properties. Highly water-soluble small-molecule-therapeutics such as peptides are extremely difficult to encapsulate with high loading in biodegradable polymer matrices, due to process challenges.

Additionally, a highly water soluble compound has limited extraction into lipophilic ocular tissues; thus, clearance rates are typically much higher for these molecules than lipophilic molecules. A highly water-soluble small-molecule drug for a retinal disorder may be best suited for intravitreal injections to achieve sustained levels at the target site. In contrast, highly lipophilic molecules such as triamcinolone acetonide and dexamethasone can be successfully delivered to the suprachoroidal space to treat inflammation in the vitreous. Mechanical microneedle-based devices can be utilised to deliver to the suprachoroidal space.

In envisioning drug delivery systems, matching the biodegradability of the matrix to the drug release profile is relevant; the matrix should be cleared from the site to ensure that components from the matrix do not cause adverse effects of local toxicity. The ideal target profile of an injectable, sustained release product for the treatment of posterior chamber diseases is: (a) injectable via a 27-31G needle, (b) precise, predictable drug release and (c) bioabsorbable and biocompatible.