Isabell Delcroix and Pascal Dugand describe a study of the multi-award-winning Safelia® auto-injector platform which showed how varying and slowing injection speed could reduce pain perception. 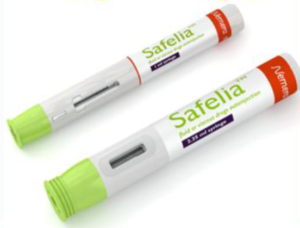 Nemera’s generation of two-step autoinjectors, Safelia® (Figure 1), has been designed to ease the patient self-injection experience and to deliver a variety of drug products in glass syringes. These range from more fluid formulations to the most challenging drugs such as viscous, sustained-released, concentrated formulations, products for subcutaneous and intramuscular injection, and including larger volumes.

Factors leading to a perception of pain are well known:

It is observed that larger dose volume (2 mL versus 1 mL) and faster injection could lead to higher stress in the tissues at the site of injection, and consequently higher pain perception. It is usually considered that a practical injection time should not exceed 10 seconds, which leads to 0.2 mL/sec injection flow rates in the case of 2 mL injected volumes. As a result, compared with 1 mL syringes, it can be anticipated that the increased injection speed, could cause a higher perception of pain to patients.

Design features and benefits of the Safelia® device are summarised in Table 1.

Table 1: Summary of design features and benefits of the Safelia® platform.

Nemera has conducted a study investigating how adjusting and controlling injection speed could impact on pain perception, in particular for viscous and large-volume injections.

The primary objective of this study was to estimate injection force increase in porcine adipose tissue in the case of high viscous formulations (100 cP) and large dose volume (2 mL). The final aim was to propose a way to optimise injection devices to minimise the perception of pain by patients.

1. Injection in air was performed to determine injection force without tissue back force.

The sequence is shown in Figure 2. 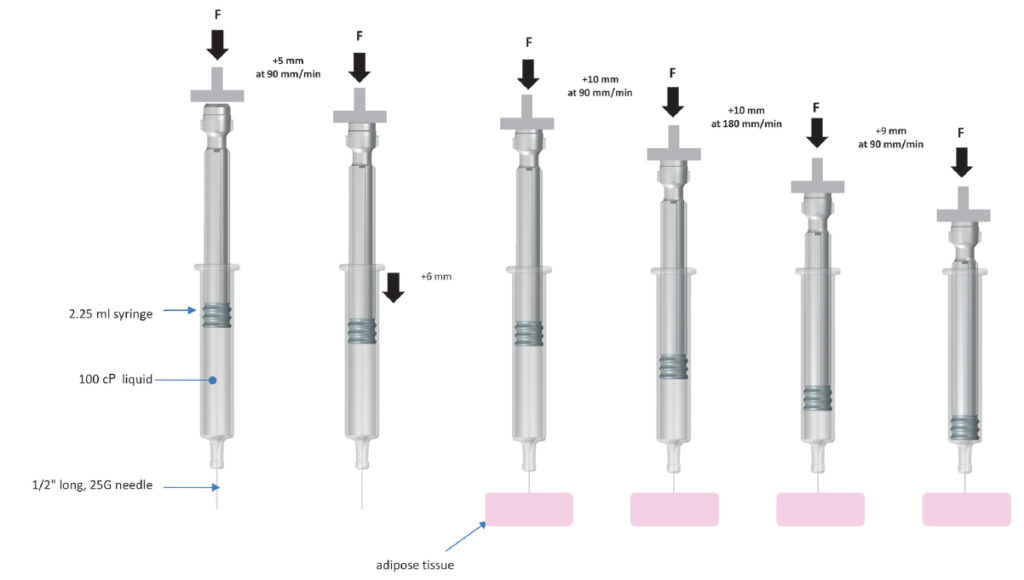 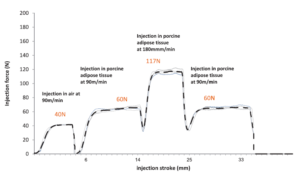 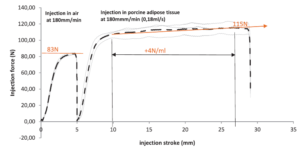 Injection force increase in porcine adipose tissue in the case of highly viscous formulations (100cP) at high speed and large dose volume (2 mL) have been observed. These measurements allowed a skin back force estimation. This information is very useful for auto-injector development. 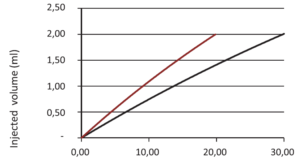 For Safelia® auto-injector, we have developed a mathematical model allowing injection time prediction including back force. This model enables us to anticipate auto-injector design at an early stage. Considering our example, with a 100 cP Newtonian liquid, 2.25 mL syringe with 25G needle and a 100 N spring force, the injection time in porcine adipose tissue is 10 seconds greater than injection in air (see Figure 6).

Increasing auto-injector energy could allow the dose to be delivered within the expected delivery time; but different studies have shown that the higher injection speed and dose volume limit dose absorption by the tissues and induce greater pain.

At end of injection, dose volume is at its maximum, whilst tissues are saturated. Diminishing end of injection speed will lower injection force, favouring drug absorption. The resulting pressure drop in the tissues could help also to reduce pain perception.

By design, the injection speed profile of Safelia® can be tailored to minimise injection forces. This injection force control should prevent the initial injection peak force, and allow a better drug absorption, and could lead to less pain perception.

Injection should be painless, and comfortable for users. Controlling injection speed is a way to achieve less painful injections.

PREFILLED SYRINGES
FROM GRANULATE TO PACKAGED PRODUCT
ZAHORANSKY runs through the options and advantages conferred by Z.BLIZZARD and its other automation technologies, with further explanations from Berthold Schopferer.

EXPERT VIEW
FROM PREFILLED SYRINGES TO COMBI-FILLING
Klaus Ullherr summarises the state of modern packaging technology in the pharmaceutical industry in the light of the biotech boom, ready-to-fill and pre-sterilised containers and the trend towards individualised healthcare.