INHALIA®: A NEW pMDI METERING VALVE PLATFORM THAT PATIENTS CAN COUNT ON

Treatments for pulmonary diseases such as asthma and COPD can be delivered via a number of different routes. Due to the direct and immediate action onto the bronchi, the reduction of side-effects as well as patient convenience and relatively low cost per dose, inhaled treatments remain the preferred treatment route. 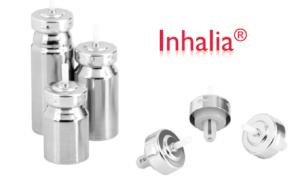 Nemera has designed a new platform of proprietary metering valves for pMDIs targeting local and systemic treatments delivered to and through the lungs. The valve platform, named Inhalia® (see Figure 1), is part of a portfolio of innovation platforms developed at Nemera’s Innovation Centre for Devices near Lyon, France.

In 2015, Nemera performed a series of comparative studies between the Inhalia pMDI valve platform and other commercially available pMDI devices. In the study the devices were tested on performance criteria such as prime retention, leakage and actuation force to deliver a dose.

Good patient adherence plays a significant role in pulmonary treatments. Rates of non-adherence for asthma patients range between 30% and 70% 1 and adherence rates for regular preventive treatments are as low as 28% in developed countries.2,3

When tested in vitro, pMDIs are usually primed by firing several times to waste, but this is rarely done by patients in practice.4 Therefore, removing the need for a priming actuation after extended periods of nonusage can help drive patient compliance.

In the study performed, five marketed devices with different active ingredients and metering valves were tested at end-of-use for their retention of formulation in the dosing chamber. The test was performed after five and 14 days to mimic infrequent use by patients with up to two weeks between actuations. 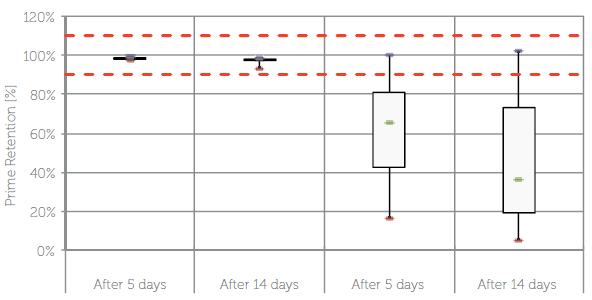 Figure 2: Prime retention after five and 14 days tested at end-of-use

As can be seen in Figure 2, prime retention varies significantly between devices tested with the average being below 90%, which is decreasing with time.

With a prime retention at 14 days of more than 90%, Inhalia decreases the requirement for a priming shot as it delivers complete shots between uses even for infrequent treatments.

Throughout the life of the product, the pMDI device must remain a closed system to avoid leakage of the formulation and to minimise any potential moisture ingress, both of which could negatively affect the performance of the product and therefore prevent the effective delivery of the dose to the patient. Especially with smaller doses, the prevention of leakage is crucial as any leakage of hydrofluoroalkane (HFA) gas could impact the concentration and stability of the delivered dose.

Equally, moisture ingress into the device may negatively impact drug stability and performance and is therefore a critical measure for pMDIs. In particular, ethanol, which is often used as a co-solvent, can increase moisture uptake and HFA propellants used in the majority of marketed pMDIs today have a high sensitivity to moisture.5,6

In the second part of the study, all devices were tested on leakage levels after accelerated ageing at 40°C and 75% relative humidity. As can be seen from the test results summarised in Figure 3, the benchmark shows that leak levels from a number of tested devices can be as high as 500 mg/year. Due to its unique engineered design and choice of materials, Inhalia achieves leakage rates that are close to zero and significantly below the average found on the market today.

FACILITATING THE USE OF pMDIS IN PATIENT HANDS

The actuation force, or force that needs to be applied to dispense a dose from a pMDI, plays a significant role for patients, especially children and elderly patients who might not have as much strength to apply this force. It should thus be as low as possible to ensure that all patient groups are able to take their medication without difficulty.

In addition, with the increasing number of pMDIs with dose-counters fitted, valves have to be robust and need to have a return force high enough to avoid any malfunctioning or blockage of the integrated dose-counter mechanism.

Therefore, in the final part of the study, valve force profiles were tested (Figure 4). Since the forces applied can vary significantly depending on the formulation, all tests were done with salbutamol formulations to maximise comparability. On average, actua-tion forces were found to be above 32N and return forces around 7N.

With a dedicated spring profile and design that minimise friction between gaskets and stem, the Inhalia valve has been designed to be patient friendly. The design reduces the actuation force to below 30N while keeping the return force high until the end of the stroke, to ensure that the dose counter mechanism can reset without blocking the valve.

Innovating for patients is at the heart of Nemera’s mission. Inhalia was designed as a next-generation platform to address the market’s unmet needs and stringent regulatory requirements for pulmonary drug delivery in place today. Consistent dose delivery performance, long prime retention and low leakage are key benefits for patients. In addition, low leakage rates also avoid costly overfilling of formulation for the pharmaceutical company. As shown, the design has been optimised to accommodate dose counter mechanisms which are an increasing requirement in many markets today.

Inhalia is available in a variety of configurations and doses to meet a wide range of market requirements.

INTRODUCING OCUSURF™ NANOSTRUCTURED EMULSION AS A 505(B)(2) STRATEGY

PULMONARY
COMPLETE SOLUTION FOR PMDI PRODUCTS: FROM DEVELOPMENT TO QUALITY CONTROL TESTING
Heli Chauhan outlines the major challenges encountered in testing pressurised metered dose inhalers, and how Proveris’ portfolio of instruments can be an invaluable addition to the testing workflow.