Takuya Minezaki and Tomohiro Suzuki, provide an overview of the company’s OXYCAPT™ Vials and Syringes, explaining how their multi-layered polymer material delivers the advantages of both COP and glass, and is especially suitable for biotherapeutics.

Figure 2: The multilayer structure of OXYCAPT™ Vials and Syringes.

OXYCAPT™ consists of three layers (Figure 2): the drug contact layer and outer layer, both made from cyclo-olefin polymer (COP); and the oxygen barrier layer, which is made from a proprietary, novel polyester. This enables OXYCAPT™ to offer:

As regulatory authorities have reported, there are problems with some existing glass and plastic vials and syringes. For example, glass suffers from breakage, delamination, etc, and traditional plastic does not represent a sufficient oxygen and UV barrier. Especially in glass, the US FDA has pointed out such problems and reported more than 50 recalls. To address these problems from glass, many suppliers have launched plastic vials and syringes as alternatives, but their oxygen barrier properties have not always met customer demands.

“OXYCAPT™ vials and syringes are produced by co-injection moulding technology. This technology has been applied to beverage bottles for many years, but we are the first company that has succeeded in developing multilayer plastic syringes.”

OXYCAPT™ represents a plastic material with oxygen barrier properties almost the same as glass, and more than 100times better than COP (Figure 3). According to our internal studies using antibodies, OXYCAPT™ also outperformed both glass and COP in terms of preventing oxidation. Biologics are often vulnerable to oxidation, and OXYCAPT™ can contribute to the stability of such oxygen sensitive drugs.
OXYCAPT™ UV barrier properties also compare very favourably indeed to other materials. For example, about 70% of UV (300 nm) light transmits through glass and COP, whereas only 1.7% transmits through OXYCAPT™ (Figure 4). We have confirmed that this feature of OXYCAPT™ also contributes to stability of biologics. 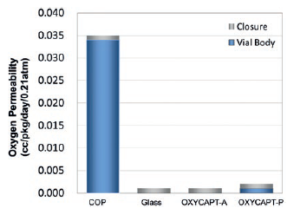 As a barrier to water vapour, OXYCAPT™ cannot outperform glass. Nonetheless, it is comparable with COP and, like COP, OXYCAPT™ comfortably meets with the ICH guideline for water vapour barrier properties.

Studies have shown extremely low extractables with OXYCAPT™. One study was conducted to confirm volatile, semi-volatile and non-volatile impurities from OXYCAPT™. Water and four solutions (50% ethanol, NaCl, NaOH and H3PO4) were used and impurities were measured by gas chromatography-mass spectrometry (GC-MS) and liquid chromatography-UV spectroscopy-mass spectrometry (LC-UV-MS) after 70 days at 40°C. Compared with the control, no impurities were detected in any of the OXYCAPT™ containers. A second study was conducted to measure inorganic extractables from OXYCAPT™. The level of extractables was similar to those from COP, which is well-known as an extremely pure polymer, and less than that of Type I glass (Figure 5). 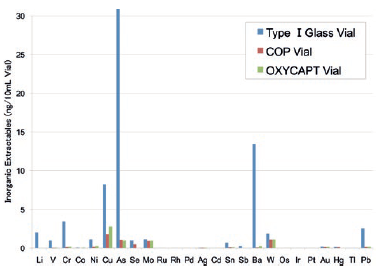 Figure 5: Graph comparing inorganic extractables levels from OXYCAPT™ with those from COP and glass.

The OXYCAPT™ Syringe consists of tip-cap, barrel, polytetrafluoroethylene (PTFE)-laminated stopper, and plunger rod. Although a very small amount of silicone-oilis sprayed on stoppers of the OXYCAPT™
Syringe, no silicone oil is baked-on to the barrel. According to MGC internal studies using antibodies, this feature leads to much less protein aggregation compared with Type 1 glass syringes.

OXYCAPT™ vials and syringes are produced by co-injection moulding technology. This technology has been applied to beverage bottles for many years, but we are the first company that has succeeded in developing multilayer plastic syringes. We have also successfully developed inspection methods for the oxygen barrier layer such that all containers are 100% inspected by state-of-the art inspection machinery. 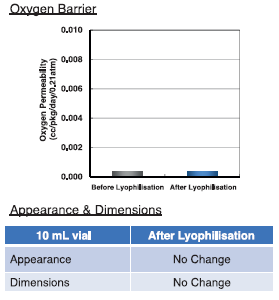 MGC can offer bulk vials, ready-to-use (RTU) vials and RTU syringes. Regarding the RTU products, vials and syringes are provided in ISO based nest & tub formats. The nests & tubs are mainly sterilised by gamma irradiation. MGC offers 2, 6 and 10 mL vials, and 1 mL “Long” and 2.25 mL syringes, and the company is able to provide samples for initial testing free of charge. 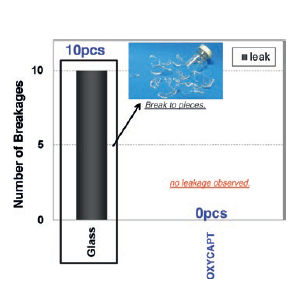 In recent studies of lyophlisation and cold storage resistance, after being filled with albumin solution, vials were primarily frozen at -50°C for six hours, secondary dried at 4°C for 48 hours, and finally dried at 25°C for nine hours. We measured oxygen barrier, appearance and dimensions, and found OXYCPT™ maintained its properties and dimensions before and after lyophilisation (Figure 6).

In addition, vials were dropped from 150 cm height to confirm break resistance. All of the glass vials were broken, but zero breakage was observed with OXYCAPT™ vials (Figure 7). Vials were also stored at -80°C to confirm cold storage resistance. Whenfrozen OXYCAPT™ vials were dropped from 150 cm height, no breakage was observed. To understand any influences on long-term cold storage, the same studies will be conducted over six-month and two-year periods.

Our targeted application for OXYCAPT™ is biologic therapeutics. As the ICH Guideline “Stability of Biotechnological/Biological Products Q5C” mentions, oxidation is one of the causes of protein instability. The excellent profile of OXYCAPT™ with regard to oxygen and UV barrier properties promises to contribute to stability of biologic products.

In addition, we believe OXYCAPT™ can be applied to epinephrine, because it is well known to be an oxygen sensitive drug. Glass syringes, having problems with breakage, are not ideal for emergency drugs, so some suppliers have tried to develop new pen injectors made of plastic.

Customisability is another feature of plastic, and MGC can customise OXYCAPT™ containers to meet specific requirements.

OXYCAPT™ has been developed to overcome the current problems the pharmaceutical industry is experiencing with syringes and vials made from traditional materials. OXYCAPT™ combines the benefits and features of COP, such as high water vapour barrier properties, high break resistance, very low extractables and low protein adsorption, with the high oxygen & UV barrier properties associated with glass.
In the rapidly growing biologics sector, OXYCAPT™ vials and syringes deliver substantial benefits.

MGC is a major chemical products manufacturer operating across a wide range of industries. In the field of drug delivery, the company's Advanced Business Development Division has developed OXYCAPT™ Vial & Syringe from a novel polymer, as an alternative to glass primary packaging.