NASAL DRUG DELIVERY VIA THE ORAL ROUTE USING A PMDI

Laurent Vecellio, Déborah Le Pennec and Alain Regard, Technology Product Manage discuss a study Nemera has funded into the retronose concept, using a pMDI to deliver to the nasal cavity via the oral route during exhalation through the nose.

Nasal drug delivery is a non-invasive method that allows for a rapid, high and local therapeutic effect. It offers significant opportunities for new drug development looking to deliver systemic drugs, vaccines and treatments for the central nervous system. A recent study in patients with chronic rhinosinusitis has shown how deposition of corticosteroids in the nasal cavities can have an impact on clinical outcomes.1 This study demonstrated the importance of the delivery device on drug efficacy. 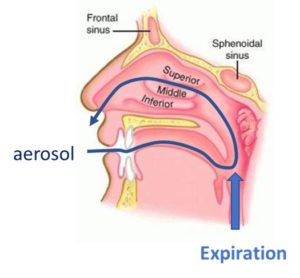 Standard nasal sprays have limitations regarding the reproducibility and the deposition efficacy in the distal region of interest in the nasal cavities. An alternative, the “retronose” concept (Figure 1) has been proposed as a means to reduce variability and improve drug deposition in specific nasal zones, consisting of drug administration through the buccal cavity during the nasal expiratory phase.

Using this method, a different nebuliser concept has been developed for better drug deposition in the distal region of the nose,2,3 without lung deposition. Drug particles enter the nasal cavities through the rhinopharynx, which has a significant impact on drug deposition. Additionally, in a recent study, five asthmatics with rhinosinusitis were successfully treated with an aerosol therapy exhaled through the nose4 using a similar concept.

In the study funded by Nemera presented here, the use of a pressurised metered dose inhaler (pMDI), as an alternative to a nebuliser, for delivering drugs to the nose via the buccal cavity was explored. Specifically, the study focused on the influence of particle size and the expiratory flow rate on particle deposition in an upper airways model using a standard pMDI.

A pMDI filled with HFA 134a propellant (no surfactant) was used with a 90 μL valve system (Inhalia®, Nemera) and an actuator (NM200, Bespak, Germany). Three different particle sizes (3, 12 and 20 μm in terms of volume mean diameter) of a model drug were put in the canisters, resulting in three different pMDI suspensions (pMDI-A, pMDI-B, pMDI-C) delivering 100 μg of drug per dose. Aerosol particle size produced was measured using a cascade impactor operating at 30 L/min (Next Generation Impactor, Copley Scientific, UK). 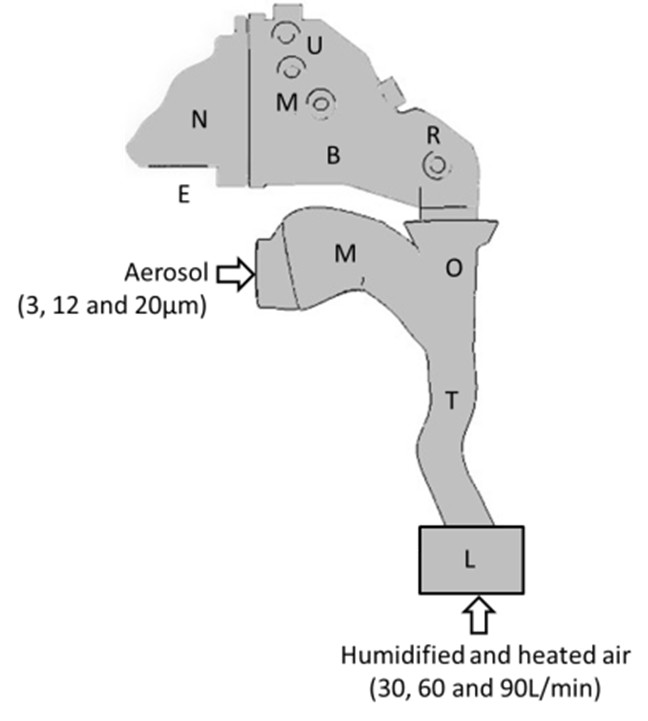 Aerosol deposition in the upper airways (Figure 2) was studied using an anatomical model5 developed by the Virginia Commonwealth University (Richmond, VA, US). The trachea model was connected to an absolute filter (L) and a humidified air source at three different flow rates: 30, 60 and 90 L/min. A vacuum pump connected to an absolute filter (E) was located near to the nose model for collecting the totality of the exhaled aerosol from the model. Eight regions of interest were defined in the upper airway model:

The active compound was assayed by a spectrophotometric method.

The aerosol particle sizes produced by pMDI-A and pMDI-B, measured by cascade impaction, were characterised by a mass median aerodynamic diameter (MMAD) as shown in Table 1. The MMAD produced by pMDI-C could not be calculated due to its high deposition in the induction port of the cascade impactor. Regarding the percentage of particle size lower than 10 μm. The results obtained with pMDI-C are consistent with the particle size put in the canister (Table 1).

An increase of drug penetration into the nasal cavity was observed with a decrease of particle size. No active compound was detected depositing into the filter corresponding to the lung model (L). No statistical difference was observed on the influence of expiratory flow rate on aerosol deposition in the oropharynx, mouth or trachea, and drug penetration into the nasal cavity (p>0.05, Friedman test, GraphPad Prism V5) for all three flow rates were examined. 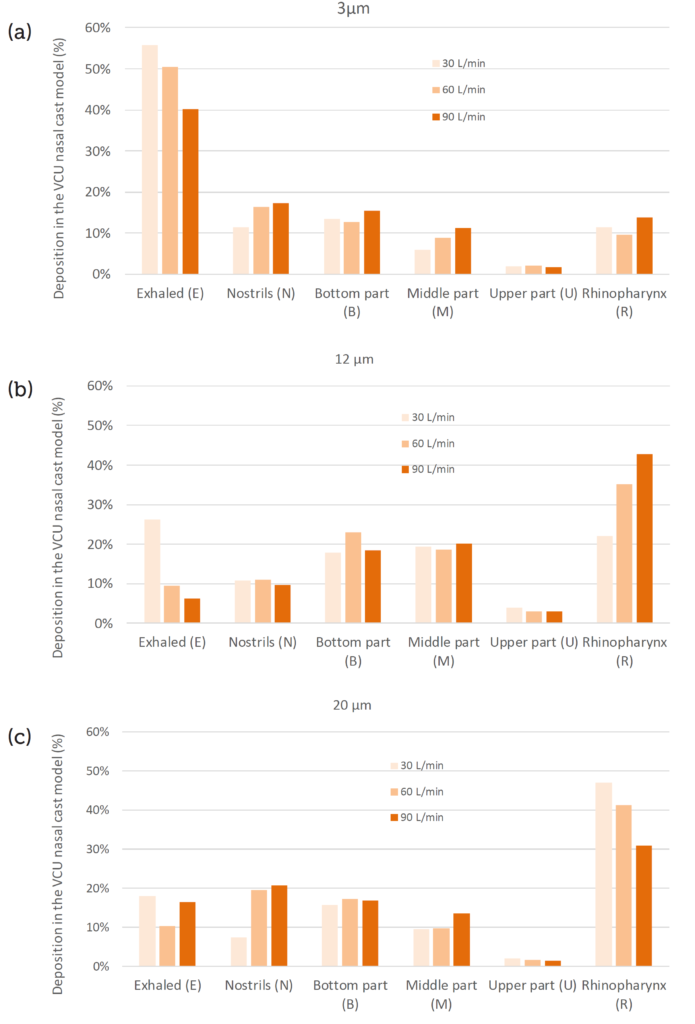 The concept of nasal drug delivery via the oral route using a pMDI in an upper airways model has been demonstrated in vitro, with promising results. All anatomical regions, except for the upper part of the nasal cavity, were successfully targeted, with relatively homogenous deposition. This nasal drug delivery system could be of interest for both local and systemic drug delivery, and for the delivery of vaccines.

The authors would like to thank Dr P Worth Longest of Virgina Commonwealth University (Richmond, VA, US) for providing the upper airways model.

REDUCING VARIABILITY IN TEST RESULTS FOR OINDPS WITH AUTOMATED ACTUATION

The University of Tours, formally University François Rabelais, has drug delivery interests in The Research Centre for Respiratory Pathologies (French acronym“CEPR”). This multidisciplinary academic laboratory is located on the campus of the Faculty of Medicine and the university hospital Bretonneau.

NASAL
INFLUENCE OF THE HUMAN FACTOR ON NASAL DRUG DELIVERY DEVICE EVALUATION
Pascale Farjas, Alain Regard and Guillaume Grevin, discuss what is required of a modern nasal spray pump and how introducing the human factor showed a significant impact on the variability of delivered volume.

NASAL
SCOPING THE DESIGN SPACE FOR GENERIC NASAL SPRAYS
Deborah Huck-Jones and Paul Kippax discuss analytical methods that can be helpful for demonstrating bioequivalence in the development of generic nasal sprays.