Shota Arakawa and Tomohiro Suzuki discuss OXYCAPT™ Plastic Vial and Syringe, Mitsubishi Gas Chemical’s proprietary material, made of multilayered cyclo-olefin polymer and a novel polyester, which provides a product with all the advantages of plastic, coupled with strong oxygen and UV barrier properties.

Although essential for humans, oxygen is basically unnecessary for processed foods and drugs. Over 40 years ago, Mitsubishi Gas Chemical (MGC) developed an oxygen absorber called AGELESS® which prevents the oxidation of foods. Since then, AGELESS® has been used for in a variety of food products worldwide and MGC has been a leading company in the oxygen-absorber field. AGELESS® has also been used for drug products, such as intravenous (IV) solutions, prefilled syringes, ampoules and tablets, for many years, especially in the Japanese market. It significantly contributes to stabilising the efficacy of drugs and extending their shelf-life. However, the use of an oxygen absorber is not common so much in the US or Europe, because additional items, including dispensing machinery, sealing equipment and secondary packaging with high gas barrier, are needed to apply the absorber.

Therefore, MGC began developing alternative technologies to the oxygen absorber. Firstly, MGC developed a new oxygen-absorbing polymer, which featured a very low level of extractables and demonstrated no degradation, even after absorbing oxygen. Secondly, MGC sought an improvement on the existing multilayer-moulding technology which has been used frequently in the beverage industry to enhance the oxygen and carbon dioxide barrier provided by the packaging. By combining these two technologies, MGC has successfully developed a multilayered plastic vial and syringe called OXYCAPT™. 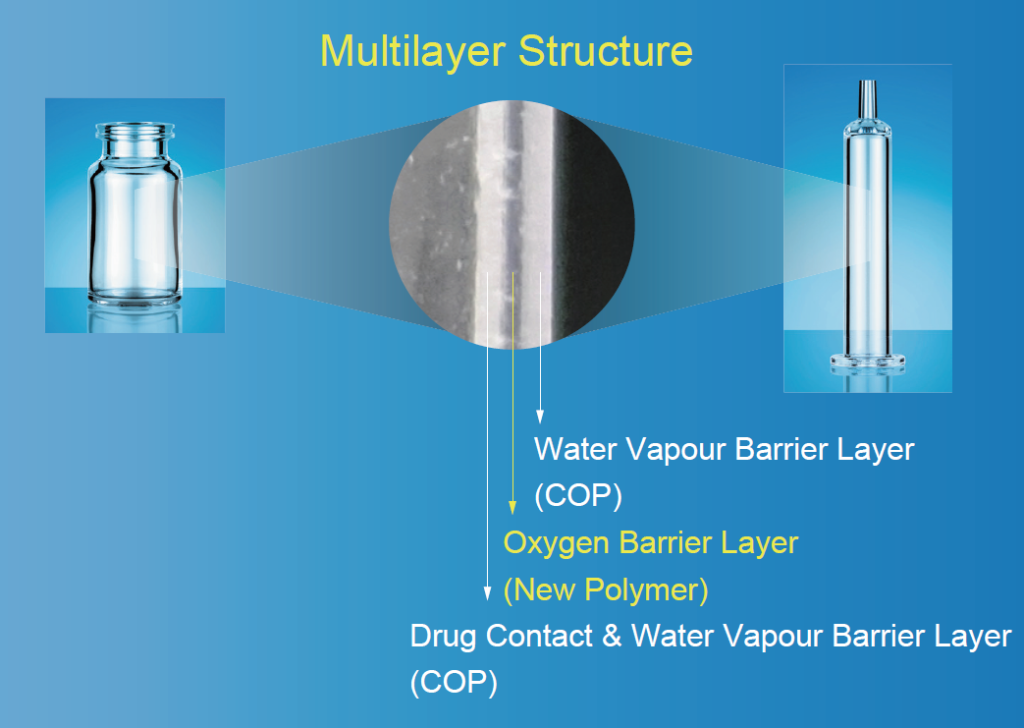 OXYCAPT™ Vial & Syringe consists of three layers. The inner and outer layer are made of cyclo-olefin polymer (COP), the most reliable polymer used by the pharma industry. The middle layer is made of a novel polyester that has been developed by MGC (Figure 1). The COP layers give OXYCAPT™ the traditional characteristic advantages of polymer vials and syringes while the new polyester plays a role as an oxygen and UV barrier to address the weaknesses inherent to using COP alone.

Current syringe primary packaging materials all come with their own problems: glass suffers from breakage and delamination, whereas plastic is not a sufficient oxygen and ultraviolet light (UV) barrier. Particularly with glass, the US FDA has pointed out these problems, which have led to more than 50 incidents of recall. To address the problems associated with glass, some suppliers have launched plastic alternatives, however the oxygen barrier provided by these products has failed to meet the demands of customers. However, OXYCAPT™ has overcome both the weaknesses of glass and of COP (Table 1). MGC believes that OXYCAPT’s achievements, including a strong oxygen barrier, very low extractables, good UV barrier and high break resistance will bring substantial benefits to the pharma industry.

Table 1: Comparison of the strengths and weaknesses of glass, COP and OXYCAPT™.

A study showed that the oxygen barrier quality of OXYCAPT™ is superior to that of glass and far better than COP. The air in vials of glass, COP and OXYCAPT™ was completely replaced with nitrogen and were then stored at 25ºC and 60% relative humidity (RH). The oxygen concentration in the COP vial immediately rose, because oxygen transmits through the wall of the vial and the surface of the rubber stopper. The glass vial with a perfect barrier property also rose up gradually, as oxygen transmits through the rubber stopper. On the other hand, OXYCAPT™ kept very low oxygen concentration for a long time, since OXYCAPT™ gradually absorbs the oxygen that permeates through the rubber stopper, as well as the vial itself (Figure 2). 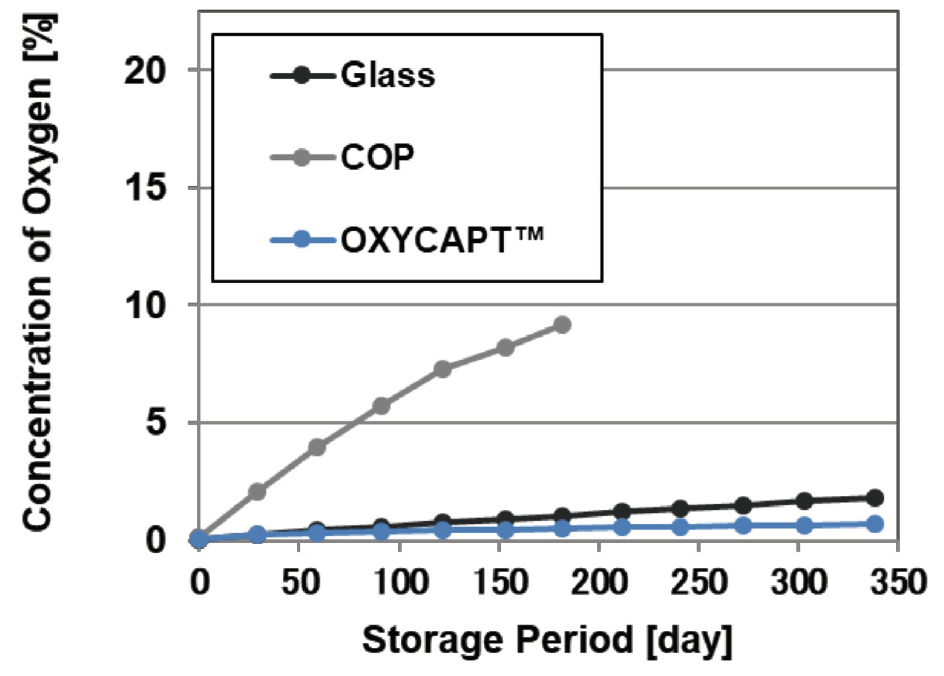 Figure 2: Concentration of oxygen over time inside vials of glass, COP and OXYCAPT™ originally filled with nitrogen.

OXYCAPT™ also provides an ultraviolet (UV) barrier. Although about 70% of 300 nm UV light transmits through glass and COP, only 1.7% transmits through OXYCAPT™. This further contributes to biologic stability. MGC conducted studies to confirm the efficacy of OXYCAPT™ as a UV and oxygen barrier. An antibody stored in containers of glass, COP and OXYCAPT™ was exposed to a light source of 2000 lx and stored at 25ºC for 14 days. The oxidation rate of methionine 256 was measured by peptide mapping. The results show that the oxygen and UV barrier of OXYCAPT™ can contribute to the stability of antibodies (Figure 3). 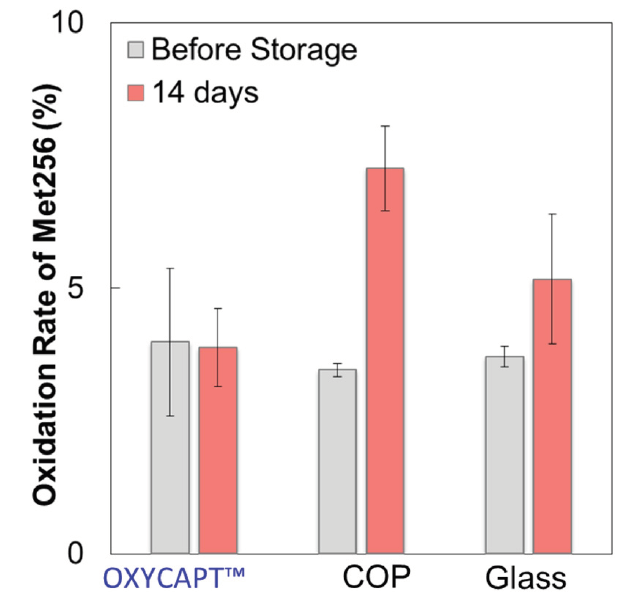 Figure 3: Oxidation rate of an antibody, stored in containers of glass, COP and OXYCAPT™ at 25°C, under a light source of 2000 lx for 14 days.

The OXYCAPT™ Syringe consists of tip cap, barrel, PTFE-laminated stopper and plunger rod (Figure 4). Although a very small amount of silicone-oil is coated on the stoppers, no silicone-oil is baked on the barrel. According to MGC’s internal studies using antibodies, it has found this feature noticeably reduces instances of protein aggregation, compared with existing Type I glass syringes. In addition to Luer Cone and Luer Lock, MGC has tackled the development of staked-needle syringes. 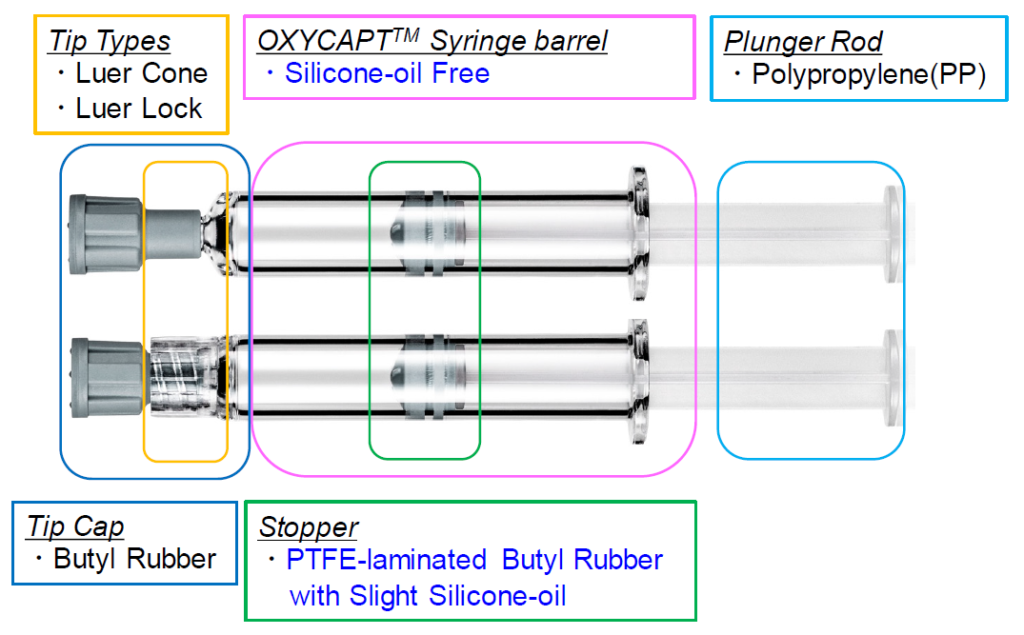 Figure 4: Components of the OXYCAPT™ syringe. 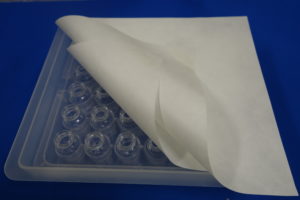 Studies have shown that OXYCAPT™ generates extremely low levels of extractables. One study was conducted to measure volatile, semi-volatile and non-volatile impurities from OXYCAPT™. Water and four solutions (50% ethanol, NaCl, NaOH and H3PO4) were used and impurities were measured by gas chromatography-mass spectrometry (GC-MS) and liquid chromatography-UV spectroscopy-mass spectrometry (LC-UV-MS) after 70 days at 40ºC. Compared with the control, no impurities were detected in any of the OXYCAPT™ containers. A second study was conducted to measure inorganic extractables from OXYCAPT™. The level of extractables was similar to those from COP, which is well-known as an extremely pure polymer, and less than that of Type I glass.

MGC can offer bulk vials, ready-to-use (RTU) vials and syringes, provided in ISO-compliant nest and tub formats (Figures 5 and 6). The nest and tub are primarily sterilised using gamma rays. There are 2, 6 and 10 mL variants for vials, and 1 mL long and 2.25 mL variants for syringes. 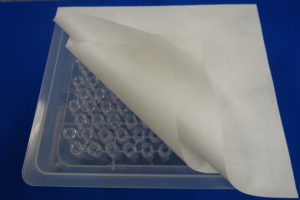 In conclusion, OXYCAPT™ Plastic Vial and Syringe was developed to overcome the weakness of glass and plastic currently in use. In addition to the special features of COP, such as a strong water vapour barrier, high breakage resistance, very low extractables and low protein adsorption, OXYCAPT™ provides a strong oxygen and UV barrier. MGC anticipates that OXYCAPT™ will be used for oxygen and UV-sensitive drugs, particularly in the rapidly growing biologics market.

THE ROAD TO PREFILLED DEVICES IN NOVEL COMBINATION PRODUCTS

MGC is a major chemical products manufacturer operating across a wide range of industries. In the field of drug delivery, the company's Advanced Business Development Division has developed OXYCAPT™ Vial & Syringe from a novel polymer, as an alternative to glass primary packaging.

PREFILLED SYRINGES
CONTROLLING AUTOINJECTOR NEEDLE INSERTION AND INJECTION SPEED
Pascal Dugand relates a study conducted by Nemera to determine a way to optimise the transition from needle insertion to syringe emptying for parenteral devices. This piece was originally presented as a poster at PDA Vienna 2017.

PREFILLED SYRINGES
OVERCOMING THE CHALLENGES: COMBINING INJECTABLE DRUG WITH SELF-INJECTION DEVICE
Steven Kaufman talks about a broad range of challenges that biopharmaceutical companies and their partners will likely face on the road to taking their biologics, biosimilars, generic injectables and even biobetters to market in combination products.