A COLLABORATION THAT SAYS YOU’RE IN SAFE HANDS

We are in an exciting new era of drug development. The relentless R&D efforts made by the pharmaceutical industry and the advances in both science and technology could facilitate many innovations making treatments widely available and accessible to patients. Such efforts have already contributed to considerable improvements in patient well-being alongside life expectancy, which has also increased dramatically compared with the past century.1

Parenteral drug delivery is one of the largest segments of the drug delivery market and accounts for approximately 30% of the market share. This is a result of various factors, including the increase of new biotherapeutics in the market place. Thanks to advancements in biotechnology, monoclonal antibody drug development makes a major contribution in this market, providing improved therapies for various disorders, such as autoimmune and cardiovascular indications, infectious diseases, cancer and inflammation. The emergence of these new biological products and the introduction of new biosimilars demands more attention for the development of advanced drug delivery technologies for these sensitive biological products.2-3

“To serve the needs of our clients to the very highest degree, Terumo and Nemera have collaborated to create a compatibility between Terumo’s PLAJEX™ prefillable syringes with Nemera’s Safe‘n’Sound® platform of add-on passive sharps injury protection devices for PFS….”

According to market analysts, the global market for prefilled syringes (PFS) will grow at a steady pace. PFS consumption has more than tripled over the past decade due to the increasing number of drugs in this format. To date, more than 3.5 billion PFS are being produced each year and that number is expected to grow by approximately 10% on an annual basis.4 Therapeutic proteins are typically administered by injection using PFS. However, these proteins may be sensitive to heat and oxidation and they have the tendency to aggregate. Protein aggregation and the elicitation of anti-drug antibodies (ADAs) may have a detrimental effect on drug efficacy, pharmacokinetics and safety for the patient.5

More than 16 years ago, Terumo launched a polymer PFS for its own branded products and has continued to develop this application for many different drug products, including applications for biotherapeutics.6In order to meet the growing regulatory demands and to produce a PFS as an appropriate primary drug container for use with these biotherapeutics, Terumo developed a polymer-based PFS. By using the advancements in polymer science Terumo has expanded its technological development and innovation in this area.

Assembly and integration of add-on safety devices (sharps injury protection devices) and auto-injectors is also an option that is on offer from Terumo’s CMO services.7

Based on this vast experience, in 2012, Terumo launched a sterile ready-to fill prefillable syringe called PLAJEX™. A combination of Zeonex® cyclo olefin polymer (COP) for the syringe barrel with a chlorobutyl rubber (CIIR) plunger stopper and its proprietary coating (i-coating™) is used for the creation of a PFS system without the use of silicone oil lubrication inside the syringe.8-9 The PLAJEX™ 1 mL Long with staked needle (27G TW x ½” or 29G TW x ½”) offers an opportunity to mitigate potential interactions with the biological drug product for numerous reasons:9-10

Polymer prefillable syringes produced from COP also offer physical properties that serve the application and integration for advanced parenteral drug delivery technologies, such as auto-injectors for self-injection and for use with add-on devices for protecting the user and healthcare provider from the risk of needlestick injuries. These features include:

To serve the needs of our clients to the very highest degree, Terumo and Nemera have collaborated to create a compatibility between Terumo’s PLAJEX™ prefillable syringes with Nemera’s Safe‘n’Sound® platform of add-on passive sharps injury protection devices for PFS. Under this collaboration, Nemera together with Terumo have defined a development plan to confirm compatibility of Safe’n’Sound® with PLAJEX™ prefillable syringes as illustrated in Figure 1. 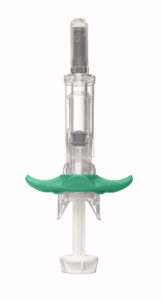 Safe’n’Sound® is a customisable platform of add-on passive sharps injury protection devices for PFS, which not only aims to prevent needlestick injuries but also to ease usage, facilitating the injection process.

As a passive sharps injury protection device, no extra gesture is required by the user with Safe’n’Sound® compared with a naked syringe. The sharps injury protection feature activates automatically after completion of the entire dose, simplifying use. User interface has been integrated since the beginning in the design and development of the device, integrating many ergonomic features: a large thumb pad surface to smooth the injection; large built-in finger flange to facilitate handling; a round shape for easy and comfortable handling; a spring located at the syringe flange position to provide good visibility of the tip and front side of the syringe for easy inspection of the drug even with low filling volume drugs. Optional add-on ergonomic extended finger flanges have also been developed to improve handling, gripping and comfort for the user.

Safe‘n’Sound®, based on high molecular weight polycarbonate, is a fully transparent device, very resistant to breakage. PLAJEX™ COP prefillable syringes are in accordance with ISO 11040-6 and present distinct design features. For example, the flange geometry is more pronounced with the edges accurately defined and having narrow tolerances, based on injection moulding process capabilities.

These features of PLAJEX™ COP provide strong performance and interaction with the Safe’n’Sound® add-on device, such as interlocking and avoidance of inadvertent dislocation. Therefore, Safe’n’Sound® device matching was conducted to create device compatibility with PLAJEX™ 1 mL Longstaked-needle PFS.

Nemera developed a specific sleeve (the inner part of the sharps injury protection device in which the syringe is snapped-in) and a specific plunger rod was prepared to be compatible with PLAJEX™ syringes and the i-coating™ plunger stopper. All performances associated to the syringe specific design and those new components were checked during the design verification plan.11

DEVICE PERFORMANCE BEFORE AND AFTER DROP

Resistance to accidental shocks is key not only from a patient perspective but also a cost point of view. A high resistance to shocks and vibrations may improve patient safety by avoiding dangerous dislocation of the add-on device. Moreover, it allows bulk packing of the safety device (lowering the transportation costs) and a more efficient process on the assembly line for higher productivity. In addition, once assembled together with the syringe, it eliminates the potential loss of expensive drugs through accidental activation.

In developing the design verification plan, and to determine performance testing criteria, reference was made to ISO 11608- 1:2014, “Needle-based injection systems for medical use. Requirements and test methods, Part 1: Needle-based injection systems”. Where a PFS by itself is not regarded as needle-based injection systems (NIS), it was considered to be a sound rational to refer to preconditioning and free fall testing requirements of this standard as it represented a potentially very effective means of really challenging and confirming the robustness of the design of the needle injury protection feature, assessing the operation and functionality of the accessory as mounted onto the PFS. Safe’n’Sound® was developed with the aim of achieving a high drop resistance.

Figure 3: Safe’n’Sound® with WFI filled PFS, drop test before use.

Drop tests were performed on the devices at room temperature before and after accelerated ageing conditions, and also after cycling conditions described hereafter.

The acceptance criteria were defined as per ISO 11608-1. Failure is considered as syringe unloading/dislocation, breakage and/or device activation. An overview of the results of the testings with the different conditions are shown in Figures 5 & 6.

Out of the 72 devices tested in every configuration, all devices passed the test successfully. No inadvertent device activation nor syringe unloading has been observed in any of the conditions described above. No breakage was noted on the PLAJEX™ PFS nor the Safe’n’Sound® device. These results confirm the robustness and compatibility of the Safe’n’Sound® device in combination with PLAJEX™ PFS.

Residual volume is considered as the volume of drug left in the syringe after completion of the injection of the intended dose. In order to confirm the compatibility of Safe’n’Sound® with PLAJEX™ syringes, tests were performed according to Nemera’s internal protocols on devices at room temperature before and after accelerated ageing conditions, as well as after cycling conditions.

The acceptance criteria were defined as residual volume should be ≤70 µL according to ISO 7886-1:1993, “Sterile hypodermic syringes for single use, Part 1: Syringes for manual use”, as well as being equivalent to the syringe without Safe’n’Sound® device. An overview of the results is shown in Figures 7 and 8.

72 devices were tested by each condition. All devices passed the test successfully. It is important to note that the results presented a very low residual dose, an important aspect for use with valuable biopharmaceuticals. Indeed, average values registered went from 1-4 µL. It has been demonstrated that the residual volume remains the same whatever the device pre-conditioning.

In order to confirm the compatibility of Safe’n’Sound® with PLAJEX™ syringes, once the design adjustment and design verification plan have been successfully executed, a simulated clinical user study was performed to validate the functionality of the device.

Safe’n’Sound® / PLAJEX™ with EFF was considered to be an effective needlestick protection device, without use problems, which allows an injection to be performed using a one hand technique, and which does not need extensive training for correct manipulation…”

In accordance with the FDA recommendations, 1000 safety devices (n=1000) of each configuration (with and without EFF) were tested. Acceptance criteria were defined in accordance with ISO 23908 and the FDA Guidance.

To mimic real clinical conditions of device use, HCPs performed injections with gloves and NHCPs without gloves. Injections were performed using an appropriate patient’s substitute and with Safe’n’Sound® / PLAJEX™ PFS filled with WFI.

The analysis of the injury onset and success of manipulations showed the following results: 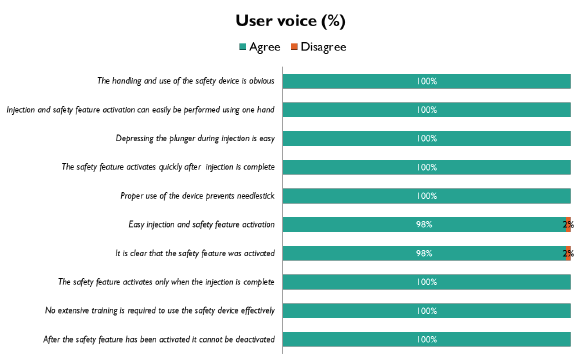 Figure 9: Summary of evaluators rating one of the tested Safe’n’Sound®/PLAJEX™ device.

From this survey, evaluators confirmed the performance of the device and its ease of use. Safe’n’Sound® / PLAJEX™ with EFF was considered to be an effective needlestick protection device, without use problems, which allows an injection to be performed using a one-hand technique, and which does not need extensive training for correct manipulation.

In this article, the compatibility of the PLAJEX™ prefillable syringes with Safe’n’Sound® passive sharps injury protection device has been highlighted. Nemera and Terumo have leveraged their polymer science know-how and competences to serve the needs of their clients and provide a unique offering for the delivery of biopharmaceuticals products.

Safe’n’Sound® combined with PLAJEX™ is a fully compatible offer which has been verified technically and validated by users. Among the key advantages, this compatibility offers the biopharmaceutical industry a passive sharps injury protection device with robustness and resistance to shocks and vibrations, minimising the risk of potential needlestick injuries and loss of expensive and lifesaving drugs.

Furthermore, a very low residual volume is obtained thanks to Safe’n’Sound® functioning and specific PLAJEX™ design and performance characteristics. The ergonomics and functionality were confirmed and appreciated by users during the simulated clinical user study.

In conclusion, Safe’n’Sound® compatibility has been established and validated with PLAJEX™ COP prefillable syringes and Safe’n’Sound® / PLAJEX™ is prepared and ready for commercial supply.

PREFILLED SYRINGES
THE VALUE OF A BD INTEGRATED SYSTEM FOR COMBINATION PRODUCTS
Theresa Bankston looks at the advantages of using an integrated system for drug-device combination products. As well as avoiding problems such as breakage and incompatibility, integrated products can offer solutions at every interface between the drug, container and delivery device and save significant amounts of time and money.